I learned I had cancer

On Tuesday, November 8th, one week before our planned flight to Cape Town, I learned I had cancer. I found myself totally thrown off kilter, off my course, off life plans.

Fortunately, for no longer than a minute.

We finished our voyage from the Seychelles to the Republic of South Africa with a crew of two on October 20th 2016. After 17 days of sailing, having visited no ports, crossed 3,100 nautical miles, and harnessed 3 storms (winds over 8 on the Beaufort scale), we entered the sunny harbour of Cape Town. On the night of October 19th, we passed Cape Agulhas, Africa’s southernmost tip. Many believe that the picturesque Cape of Good Hope is the African ultimate south; yet once we take a closer look at the map, we will have no doubt as to which location deserves the name. As we rounded Cape Agulhas in the middle of the night, I cannot say much to praise its charms. The Cape of Good Hope, on the other hand, was a place Mariusz and I decided to visit in daytime, landside, and I do have an opinion:  it is a beautiful place indeed, with a marvellous scenic turnout for tourists with a lighthouse (Cape Point). Yet it was not the goal itself that was the most beautiful, but already the road leading to the Cape, Chapmans Peak Drive, which offers truly magnificent views. Our few days in Cape Town made me like the place: its balmy spring days, breathtaking vistas, wide clean streets, and wonderful cuisine with a glass of local wine.

Mariusz had selected Cape Town as the first preparatory base for our next great journey. Our skipper had set another challenge for himself, Katharsis II, and her crew: to circumnavigate the Antarctic waters. Mariusz had been planning the voyage for a few years and he decided that the moment had come to point the yacht south, and circumnavigate the white continent along a possibly tight loop.

Katharsis II remained in Cape Town, supervised by Tomek. Preparatory works began in full swing. Before leaving, we had managed to deliver all sails for inspection and bring the thruster in for service. Other activities followed – the hydraulics system was inspected, all hoses replaced, the mast was disassembled, and rigging maintenance works were completed, alongside numerous minor yet equally important tasks.

Mariusz’s and my intentions at the time were to fly to Poland for a mere two and a half weeks, arriving on October 28th and leaving on November 15th to return to Cape Town and our intense preparations for the journey. We planned to cast off around December 6th – St. Nicolas Day. We wanted to complete all formalities required to secure a permit for sailing to Antarctica, spend a little time with our nearest and dearest, and replenish the yacht’s first aid kit. Importantly, before such a trip we also intended to undergo routine regular medical examinations. Our previous medical check-up had been that of November 2014, preceding the Antarctica expedition. Our schedule alerts kept reminding us that we were up for a medical – but there was so little time. Everything seemed to suggest that health-related matters would have to wait until spring. On the one hand, I absolutely hate postponing important stuff – yet I disbelieved that medical examinations could be fitted into an impossibly tight schedule. Fate, however, led me to undergoing them immediately without further ado. I was to see a physician on the day we landed. Fortunately, the flight was not delayed. I made it on time.

Blood tests apart, I was also referred for an ultrasound of the breasts. Usually, the waiting time is over a week. I asked for the doctor who had examined me two years before, and – as fate would have it – one of his patients had cancelled. There was a slot free on the next day. I made my appointment.

The ultrasound showed a worrying result: a tumour of around 2 centimetres. My attending physician ordered another test – a biopsy, to identify the lesion type. I received a referral immediately, and had to seek another appointment with a specialist. The waiting time in this case was even worse: It seemed I would have to wait until December. I didn’t give up, however, and I kept ringing and requesting an earlier date. I kept telling people that I was planning a several-month-long expedition to the end of the world, and would really appreciate the test before departure. Yet again, I found a doctor willing to fit me into his full schedule. I expected no bad news. Absolutely sure it was nothing dangerous, I thought I had nothing to worry about. Three days before our planned departure, I had a call. I was told that the doctor wanted to see me, as there were some irregularities in the test results. A shiver ran down my spine.

On Tuesday, November 8th, one week before our planned flight to Cape Town, I learned I had cancer. I found myself totally thrown off kilter, off my course, off life plans. Fortunately, for no longer than a minute.

Mariusz and I looked at each other.  We told ourselves that this is just another thing we would have to survive and conquer… There was no time to feel sorry for ourselves. We had to take action. The subject was all new to us! Certainly not an easy one – but we decided to face the music. We managed to secure an appointment with an oncologist that same day. The doctor turned out to be an utterly charming man, with a lovely bedside manner. At that point, I was not fully aware of how serious the whole situation was, and asked whether if we postponed our journey by two or three weeks, I would be able to recover. The doctor didn’t get angry or irritated. He simply said, with a friendly smile, that Antarctica would not dissolve in a year, and it would have been much worse if the Arctic had been at stake. But Antarctica would definitely wait for me for one year. He didn’t say from the word go that I would not be able to sail this year. He informed me of a battery of further tests and the treatment requirements they might yield. Someone could ask, why inquire about the expedition, if health it at stake, why ask such questions at all. Yet the voyage had been hugely important to me and I had no desire to abandon the idea. I think that the doctor realised how determined I was, and understood that the expedition mattered to me greatly. My illness is just an obstacle I will have to conquer to reach my goal.

That darned cancer wanted to hide inside me for a free ride to Antarctica. No way – we will not pay the creature’s ticket for such an exciting trip. I intend to have it disembarked as soon as possible.

My bag with warm clothes for the Antarctic climate went right up to the attic. It will have to wait a few months. A small case with things I will need for several days in the hospital is at my feet. Tomorrow I am undergoing breast surgery to have the tumour removed. I am very lucky to have had the tumour diagnosed at such an early stage. This is my chance for a clean bill of health. Surgery apart, I am facing a few months of battle. I hope I will have the strength to face the challenge. Icebergs and gales Mariusz and I intended to harness now seem like a summer breeze. The hurricane awaits on land.

I have every intention to get rid of the hideous thing and muster my strength to join Katharsis II‘s crew next December, on her voyage around Antarctica. 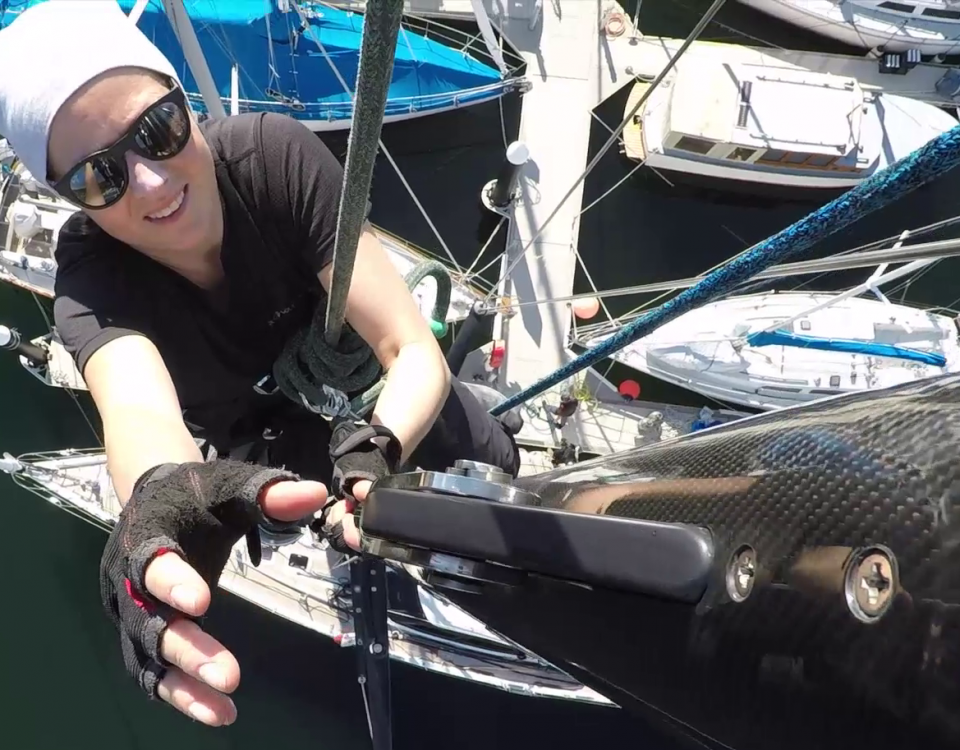 WINNING. 9th and final episode of the Double Challenge – Get Yourself Checked – Don’t Check Out” (GYC-DCO) series. (video)